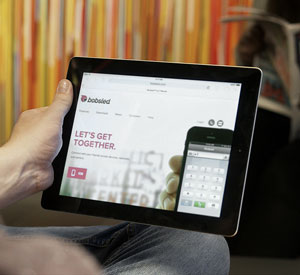 Internet calling apps, programs, and services are more popular than ever, helping people around the world stay in touch every day. So it’s no surprise that T-Mobile decided to get into the game as well. They launched a free calling app called Bobsled that allows users to call and message their friends across devices, networks, and even carriers.

Of course, developing the actual service is only half the battle. The other half? Letting people know it’s out there and ready to use.

Getting to know you.

The first step was to figure out who the Bobsled audience was in the digital space so we could know how best to reach them. Our analytics team performed an audience analysis and found that the likely Bobsled audience was younger and more urban than the typical T-Mobile user. This meant that simply moving the existing T-Mobile advertising and branding over to digital would be unlikely to resonate with the desired audience. The solution? New branding for a new product: Bobsled.

Based on the research, we worked on creating a new, youthful look-and-feel for Bobsled that extended across social, digital, and even the app itself. In addition, the Bobsled.com website was built to be fully responsive, meaning the site scales to the size of the screen in use—whether it’s a desktop, mobile phone, or tablet.

Once Bobsled was up and running across digital and social, we needed to start attracting fans in order to get the Bobsled message out to the masses. Since we knew we were aiming for a younger demographic, we created a campaign featuring popular singer Avril Lavigne, where select winners would receive a call from Avril herself—using the Bobsled calling app, of course.

As a result, the Bobsled community took off—growing by more than 180 percent during the life of the campaign, and confirming that the Bobsled message was hitting the right audience for their product.