The truth about wearables: What they are (and aren’t)

There’s something different about wearables—they aren’t just the next step in mobile technology. Find out the elements that make them unique, and what that might mean for a company’s digital strategy. 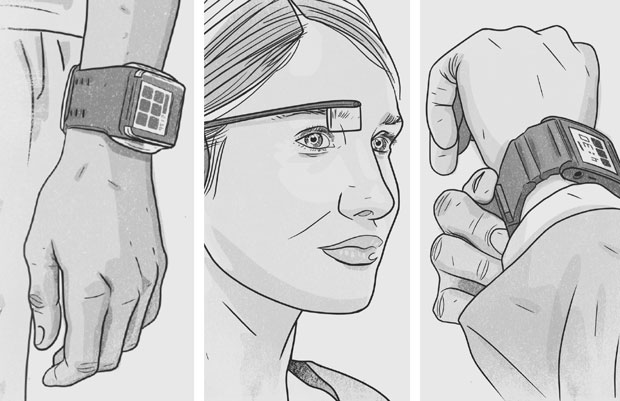 When talking about wearables with our clients, it’s been useful to frame the discussion with some theory and perspective on what this technology is all about. What surprises many of them is the idea that wearables aren’t simply the next step in mobile.

The smartphone revolution was about taking a powerful, flexible computing machine and shrinking it down to pocket size. Mobile devices allow us to take the digital world with us, so we can post to social media while standing in a store aisle or call up a sales sheet and take a customer order while in the field.

There’s something different about wearables

Wearables, however, are a brand new technology category that’s resulting from the convergence of four major trends:

Another crucial distinction from previous digital and mobile technologies is their purpose. Wearables’ primary purpose is to support immediate, real-world actions and decisions by providing directly relevant, contextual information precisely at the point of decision-making.

This implies that the primary interaction model for wearables is not “pulled” information—or in other words, requests information by taking an action like typing in a URL or clicks a link. Rather, wearables primarily “push” information to users, often based upon the user’s previously configured settings or on their physical context. Additionally, wearables are designed to have “glanceable” interaction, where only relevant information is designed in a way that can be understood almost effortlessly. This is the opposite of the “immersive” interaction we see on tablets and on the web, where users are encouraged to dive into content and deeper information.

Now we’ve defined what wearables aren’t. But what are they?

In the broadest sense, a wearable is technology you carry on your person, which contains or transmits data—but we actually don’t think of wearables as “devices.” Wearables are a modular ecosystem.

All three of these components must be connected to one another, and at least one of them must be wearable, edible, or otherwise attached to or within the body.

Critically, any given wearable device needs to have all three components available within the ecosystem, but does not need to be responsible for more than one of them. And it may not be the only device in the ecosystem that’s performing that function. A device might both sense and compute, or just communicate, or it might be one of several devices all tasked with communicating, while sensing and computing are done elsewhere. This ecosystem is modular because it can still function if we swap out our companion smartphone (computing) with a cloud service (computing), or if we add both a sports band (sensing) and a smart thermostat (sensing and communicating).

So what are “apps” in a wearable ecosystem? In the mobile space, an app is simply a piece of software that’s running on a computing device. But in the wearable ecosystem, apps are often actually split between the devices, so you might have part of the app running on the communicating device, part on the computing device, and part adding intelligence to the sensor. In this model, wearables may be simply subscribing to data feeds from other sources, or may both be subscribing and performing an action on the data it receives. This is a very different model than we’re familiar with from existing app stores.

What this means for your digital strategy

Wearables are a new technology and a new ecosystem, not simply an extension of the mobile devices in our pockets. Therefore the challenge, and the opportunity, is to think beyond the smartphone experience and to use them to do things no previous technology could do.